Be great and go work for Spielberg; New Michael Arndt project and other news


The most inspiring news of the week, and we could stretch the timeline, is that of hitherto unknown designer James Curran from now on being part of Steven Spielberg's team. Inspired by the release of the director's most recent feature, The Adventures of Tintin, he decided to create a fan-made opening credit sequence, based on the whole characters and adventures by the Belgian strips. I had the pleasure to watch it a few days before the assignment went public (perhaps even before Spielberg watched it himself) and I remember thinking that had this guythe right opportunity in Hollywood, he would certainly be up to the task. Two days later, the news came out: James Curran will be working on the sequel, already written, which will be produced by Steven and directed by Peter Jackson.

After scoring a terrific 104-episodes feedback, Disney Channel animated TV series Phineas and Ferb is climbing up to the big screen. The great news is that Oscar-winner Michael Arndt ("Little Miss Sunshine" and "Toy Story 3") will be re-writing the draft handled by the creators. Praised for its sharp sense of humor (a clever show for kids), tells the story of three siblings and their undercovered agent pet, dwelting on their particularly creative summertime adventures.

Keeping track on the world of animation films, The Muppets promotion continues to troll... the whole world of movies. This time, they mock "Going in the Distance", "Happy Feet", "Paranormal Activity", "Twilight", among others. 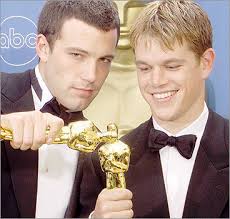 After producing, writing, directing and staring box-office success ($154 million) The Town, Ben Affleck was allotted another Boston backdroped film, the story of Whitey Bulgar, one of the most wanted man by the FBI until last year (when he was 81 years old). But this time, he will only co-produce, co-write and direct. First, this is good because there is a difference between the helmer Affleck and the actor Affleck. Second, this is good because the other halves will be filled by his longtime friend and partner, Matt Damon, who will also star as main character. The two first collaborated in 1995-1997, writing Good Will Hunting for which they won Best Original Screenplay and blossomed as some of Hollywood's most promising talents.

Finally, Robert De Niro may be making that comeback to decent roles we've been waiting for so long. Sean Penn will be directing The Comedian, with the great character psychological depth and balance between external and inner struggle driving the film. Sounds pretty different from Little Fockers.