For those who may not be familiar with the term, the spec script is a screenplay written under no kind of assignment other than the writer's will or need to write. Working freelance. Just like you would pen a newspaper article of your own and tried to sell it to a newspaper. Due to market dimensions and other constraints, it is not usually practiced in Europe - the auteur paradigm and the public financing system often requires that every script shall be attached to a director or a producer right from the start. On the other side of the Atlantic, not only it happens but also some of those spec scripts end up turning into some of the most successful movies of the year. Take Michael Arndt's debut with Little Miss Sunshine (won Oscar for Best Original Screenplay), Alan Ball's American Beauty (won several Oscars), Shyalaman's The Sixth Sense (nominated for several Oscars), cult erotic-thriller Basic Instict (script sold for $3 million) or Charlie Kaufman's Being John Malkovich. And did you know Quentin Tarantino didn't start his career with Reservoir Dogs but by selling two spec scripts, Natural Born Killers (to Oliver Stone) and True Romance (Tony Scott) ?

Every year, spec scripts are sold and the industry is always waiting and searching for the next writer coming up with the most amazing story of his own initiative. This time, we may be witnessing the birth of a new spec selling strategy: the spec script trailer. 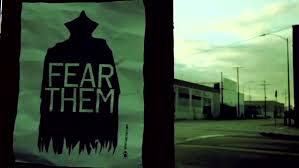 Brandon Bestenheider & Allen Bey became a first-time seller team of screenwriters when recently Universal Pictures optioned their Grim Night screenplay. This is a horror film about a night that happens once a year in the whole world, when people lock themselves at home and hide from the terrifying Grims, some hooded black creatures. There you go, the strong concept, the precise genre, the probably archetypal structure, stuff that makes it different but recognizable enough for the big studios to see it as a business chance. It has been done, it worked; it has something new, people will want to watch it.

But do you wonder how did this two guys pitch this to the agents ? Do you imagine how they articulated the synopsis, how they structured the presentation, if they embarrassedly choked at some point ? Brandon and Allen did something much more effective. They got themselves a movie camera, some costumes and some friends and shoot a spec script trailer of what they wrote and wanted to sell. Check it out bellow.

Remember James Curran, from some posts back, who created those amazing The Adventures of Tintin opening credits and now is going to work for Steven Spielberg ? Well, that's it. Be creative. And thrive.