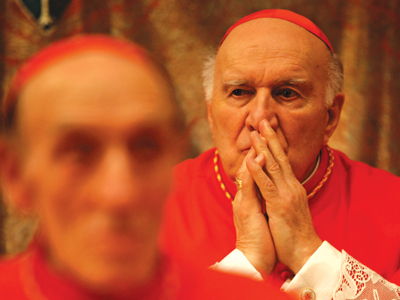 A newly elected Pope that flees from the S. Peter's Basilica before waving his blessing to the believers and a psychoanalyst who becomes imprisoned inside it until the Holly Priest emerges on the balcony. Melville, the sincere and dense Michel Piccoli, is unexpectedly chosen on the third round and embodies all the doubts and fears the whole Concilium holds prior to the voting, going as far as making "acting" and "rehearsals" a metaphor for the Kingdom of God's best man. Professor Brezzi, the wit optimistic Nanni Moretti, is summoned to help him dealing with the shock but is hindered by the ultra-conservationism of the Cardinals, and stays to become the master of trivialization of the secrecy the priests ritually respect and because of which 100 million people suffer in anxiety. On the one side, the Father of the dogmas that cannot deal with them, withering into the nostalgia and existentialism of the common man, uncertain of what he has done and of what he has to do. On the other side, the bastion of science and progress, an enemy of the dogma, who not only is physically prisoner of the Conclave but who also is a prisoner of himself, his beliefs, his methods, just as his wife was. Two sides of the same coin, two layers of the human being, in an arrangement that, however the final discourse (change for the Church), transcends any religious beliefs. Picturing beautiful scenarios (amazing work at Cinecittá), lilting between fine detail and reactions and unexpected small set-pieces (dramatic: the theater; slapstick: the volleyball game), We Have a Pope is a whimsical but also profound essay on the Church as a system and on mankind as a species of enduring and underling beliefs. 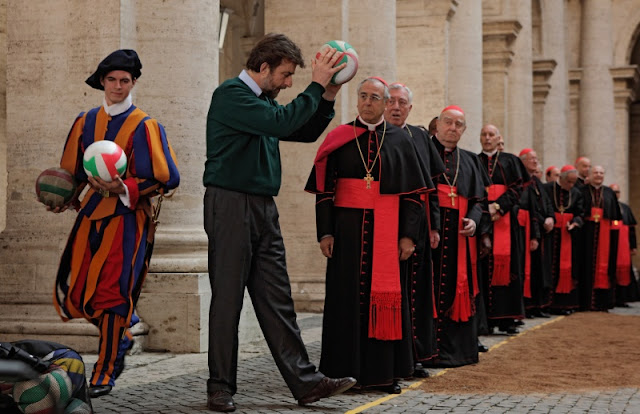