Yasmina Reza stepped into the stage a few minutes before the film started and summarized the story of her friendship and collaboration with Roman Polanski, with whom she adapted her play God of Carnage into the script Carnage which we were about to watch. Right there I considered I would probably like her to come back in the end to approach her style, dialog, structure, characters, work. In the end, I only wanted her to step back in order to feel that she was completely aware of the huge applause that burst as soon as the ending credits started rolling.

Many reviewers wrote that this is no more than a play taken to the screen with a brilliant casting in order to allow a massive audience to see it. To some extent, I think so. It is in fact a play, more than a script, for everything comes out of the dialog and the mimics. The conflict travels through the words of each parent, the beats come with reactions to each line, the emotional shifts and the character arch are due to precise words and their continuous lines of interpretation and response. 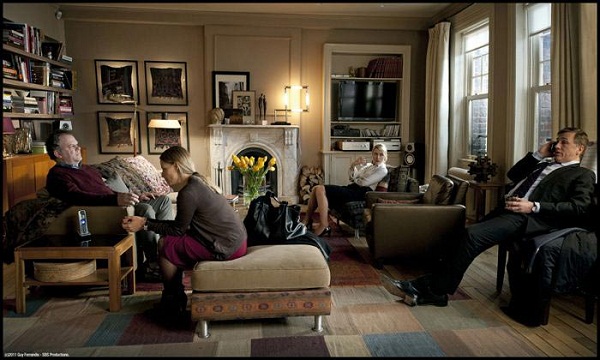 Polanski doesn't create the destructive feeling of impotence from The Pianist, nor the claustrophobic nausea from Repulsion. But this is a work of huge sensibility on how to put the camera, on how to frame a face and a word and on how and where to insert a reaction. Roman had to engineer a square of people in a room and make use of the great distinction between cinema and theater (the scales - remember how Griffith departed from Mélies and Porter ?) to convey the proper emotional journey of the two couples. Sometimes the framing is slanted, sometimes the camera is shaking. A stage won't give you that. Anyway, what makes this a very good movie is the script and the actors. I laughed all the way long, at each thirty or sixty seconds. Incredibly witty, very believable, extraordinary performances (Winslet was gorgeous). An intelligent satire to middle class and to contemporary politically correctness of human relationships, which specially by the setting reminds us of The Exterminating Angel by Buñuel. The ending, with Desplat's hithereto absent notes, is genios and hilarious.