A Separation (2011), or why the Government won't solve the problems of Portuguese cinema

Nader and Simin: A Separation is one of the best 2011 films I've seen so far, written, directed and produced by Asghar Farhadi, 2009 winner of the Silver Bear with About Elly, among other accolades. In fact, he sort of repeated the play by conquering this year's Golden Bear, in two years attaching to his curriculum the two major awards from the Berlin Film Festival. One of the magnificent things about this work is what it is, the writing, the camera, the actors. Nader and Simin are discussing their divorce with the Judge from the usual Iranian documentary-fiction point of view, but soon is this scene turned into a mac guffin for something quite embracing and unexpected.

Within the domestic drama arises an intriguing question about who's telling the truth about an accident and before you know it, elements of thriller suspense pour from all sides, as tight and paused as lava. A low pace, tensely building a claustrophobic and uncomfortable atmosphere that won't even remind you of an actual police film or a traditional court drama. That is because the air and the senses aren't grounded on guns, cars chases or brilliant speeches, for that imprisonment is of moral and religious constraints and restrictions. 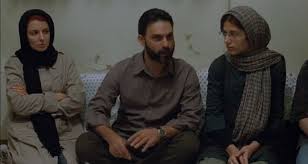 Abbas Kiarostami had to come to Europe with is latest Copie Conform (2010). Jafar Panahi was condemned to 20 years of impediment to make films by the Iranian justice and had to hide his This is Not a Film (2011) inside a traveling cake in order to get it to Cannes. An oppressive regime funded on equally oppressive religious dogmas whose condemnable actions go way beyond the seventh art and constantly erode the dignity and human rights of the citizens, specially women. Yet, this story makes its way to tell us about justice, moral and religious standards, protector love and, most of all, truth and its relativeness. Farhadi never takes sides, letting you be the Judge and bounce your verdict between several versions of what happened, somewhat Roshomon-like, despite here you end up knowing the truth and being emotionally hit by such. Maybe he had to do it that way in order to get passed the censorship but I'd bet he wanted the audience to delve into those simple actions and allegations and find a most complex life on the subjects, a more profound reflection about the country, Worldly-like. It is Iranian and middle-east culture all over, but you can't help connecting to all the characters (extraordinary performances), to this genuine, melodramatic-free tale of social and domestic life consequences. Compellingly universal.

Behind, alongside and on the front of what it is there's how it is. A Separation has been gathering awards all over the globe after its premiere in Berlin, is nominated for Best Foreign Film in the American Golden Globes and is the country's choice for the Academy's Best Foreign Film. It is only going to premiere in the United States on December 30 and has already collected more than $6.5 million, not counting with the Iranian box-office. With all the political and social instability, how is it possible ? How did it even get financed ? The film's budget is estimated to have been between the stupidly modest amount of $300 and $500 thousand. It has not one cent. of Governmental financing. No need to argue why this is an inspiring example and case-study for young filmmakers, a fact that should be known of the Portuguese film community and, most of all, of the Government's cultural-policy makers. Chiefly in the days when the Portuguese filmmakers keep whining and whining for the lack of state support for their films, because the Film and Audiovisual Institute has not announced the 2012 conditions yet, because they'll only receive €750 thousand this time, and so on and so forth.