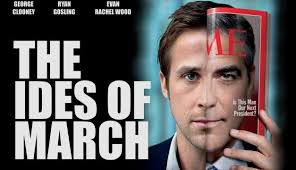 Although The Ides of March may have been sold, at some points, as the typical political drama starring George Clooney, foreseeing a much frayed genre melodramatic picture, you wouldn't have to dig too deep to find a glimpse of freshness. It all departed from the extraordinary poster, which portrayed with clearness the cynicism we would be invited to testify, but in a kind of witty and intelligent way. From there you'd peek at the rising star Ryan Gosling in a promising trailer performance and then at the old captains Philip Seymor Hoffman and Paul Giamatti in parts that could've fell by the hands of role-modeled actors like Clooney. Don't get me wrong, the acting director doesn't do a bad job. He is simply perfect for the character carved for him, and it's something we've seen him doing over and over, and not being great, he carries out well. On the other hand, Gosling draws a really great performance, the best I've watched him do (you will not forget the last shot from the film), backed up by the untouchables Seymor and Giamatti, who insistently make you want them to have more time up on the screen.

I think what makes me want to talk of the actors so much is the stylistic consistency I've tracked from Good Night and Good Luck to here. Yesterday I realized Clooney loves to work in approximate scales, namely the close up and the big close up. You're most of the times traveling on the dialogued contrivances of the plot while at the same time following a character-driven dimension of the film, from expression to expression, reaction to reaction. He does it in a pretty geometrical fashion, whether the shot is a rigorous 3/4 or a perfect profile picture, and just like he did in the film about Edward Murrow, he plays with the shadows on the faces to create a very nice suspense of what one may be thinking, feeling and hiding.

This being the first reason why I think the actors have such a particularly important figure here, now I'd like to add the well-written screenplay to the discussion. The Ides of March comprehends an intricate and in general well driven plot, which even ends up leaving you in the limb that divides the political drama and the political thriller. It opens with a very well paced twenty-minutes, with proper exposition, nicely economical, and finishes in a most fantastic third act. From the end of the first act until some point I'm not going to spoil you about, it may thank the cast for overcoming some common places and by making them yet enveloping. After this middle unexpected point (could've been much more melodramatic than it was), it is great to find that you're always wrong regarding what happens next, providing a successful way to handle the need to awake hypothesis in the mind of the audience. Although I believe in everything I've written so far, in the end I think what we will remember more intensely is not the plot or the twists, but the arch of Goslin's character, especially because of moments like the one in the kitchen, with Clooney's, when the writing (or the producing ?) surprises you by not making the latest the ultimate pretty adamant idealist politician, arising a good inner struggle in our protagonist (and avoiding an expected cliched development of Governor Morris). About the characters, I only have my doubts about the girl and her actions regarding her true situation - does it sound real, coherent ? 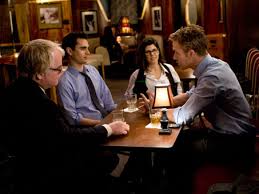 "I don't have a religion" and this is not the proper subtle film. Indeed, it works the desire to awake global consciousness, but I wouldn't call it moralist. It is very cynical that is, disenchanted, never letting the idealism by Morris win over the egoism of all the characters. All are good and bad, none is good nor bad. It sends you to the idea of unending circle (the arrival of the new girl) and of the weakness of mind of the engineers of the political campaigns and the political entrepreneurship of the United States, while the temporal track in which the film happens leaves you with the paradoxical assured incertainty of what had been going on till the movie began and what will be going on after it ends - a metaphor for what the worldwide citizens may feel about their society, for we're all assuredly uncertain that shit has been going on and will still be going on before and after we leave the room.