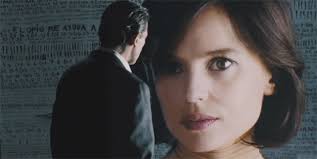 One of the main causes for my after-dinner soap opera slumped annoyance is the sheer inability those writing teams have to take risks. In the name of their creativity, of their personal fulfillment, but specially of their audiences. I was starting to flinch at Pedro Almodóvar's filmography, fearing I could grow to a boiling point sooner than I expected, as I considered his last film, Broken Embraces (2006), and its particular meaning backdroped against its precedents. He has always crafted soap opera like: domestic melodramas, conflicted by extra-passionate and sexual characters that arched upon sensational reversals based on genre, family bonds and traumatic pasts. Plus the steaming Latino tempering. But somehow he summoned unique features to those boring, exaggerated, repetitive and lazy stories. Mainly, he distorted time to construct meaningful and propelling flashbacks, painted the colors flamboyantly and the characters quickly, and brought a balance between light and dark, but always pierce, comedy, surprising by politically flagging the feminist and the LGBT's plights on every work. He made the masterpiece Talk to Her (2002). But along with this one, I realized that the films I wanted to re-watch the most were Women on a verge of a nervous breakdown (1999) and Volver (2006). I realized these were my favorite Almodóvar films. And that goes because he took some chances there. By making something different, other than the emotional broken-down homossexual/transsexual, he created a beautiful-to-tears tale about love and communion between men and woman (Talk to Her), the most funny and sensitive portrait of the modern woman (Women on a verge), and a flaming dark comedy about death (Volver). And he never grew apart from his dearest themelines. 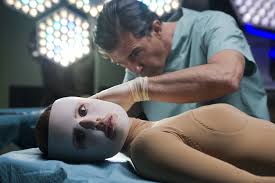 In The Skin I Live In, the Spanish helmer steered the wheel until he fell on quasi-brainwashed fresh new grounds. He went way beyond those three films and and never for one minute quit being himself. He now drained the colors only to sustain some reds and lustrous gold, painting soft bleak frames of a Japanese austerity and of a female finesse. The beige is the suit and the skins, the faces, the masks. It edges a curve shaped art-direction and the perfect body of Elena Anaya. The geometrics and the anatomical qualities of the visuals connect to the big plot element of the surgeries that the scary Banderas practices. Here, plastic-surgery is not a strategy, a convenience nor a science. It is an art. The art of creating. The first horror device is the outright voyeurism of the mansion: the evocative paintings on the walls; the camera on the locked room and its big-brother correspondent screens on the other rooms. Before the first major turn, the peeking exposes us (or the characters?) to a crude raping scene followed by an unruffled murder.

Elena's look and expression, which you can't say is it sexy or scared, strips you off of any ease. Bandera's sharpens it with the eyes of an insane man. He is, in fact, wickedly obsessed. Almodóvar signs another mark when he transports us to a completely flashbacked Act II. That's when you get the nastiest horror taste, with some darker sets, scenes and objects, a gruesome and freakingly unexpected midpoint and a coherent bridled bloodbath. It is payoff after payoff and it becomes more enveloping one after the another. The horror parts signal the most important reversals or enlightenment and the structure proves to be perfect as the thematic core hits us after sixty-minutes of suspense, instead of arriving as a casual turning point surprise.

He threw away almost all of the melodrama. Despite I cannot understand why we had to know the relationship between the "tiger" and Paredes, I can accept all of Banderas' motives. It is so plausible and human, within such a stylized world. And by never letting go the LGBT fight he doesn't perpetuate a mourning song nor a perverse whining for attention. Instead, he makes a very compelling frightening revenge movie where a message is eminent and undoubtedly blunt. Everything is masterfully tied up and organic, fr0m beats, to metaphors, to narrative rhymes. This is a story about the sickness of constraining others to live in a foreign skin and on a foreign person, told upon how seductive and deceiving the surfaces are, and about the strength one must endure to break out and stand up for himself, for his identity. One of my favorite films of the year and certainly one of my favorite Almodóvar films.