"José and Pilar" is the Portuguese candidate for Best Foreign Picture: why is it the wisest choice

José and Pilar, the documentary on the Nobel Prize for Literature laureate José Saramago, was picked by the commission appointed by the Portuguese Institute of Cinema as the Portuguese candidate for Best Foreign Picture to the Academy's consideration until the official announcement of the nominees for the Oscars 2012, on January 24th.

Now, why is it the wisest choice ? 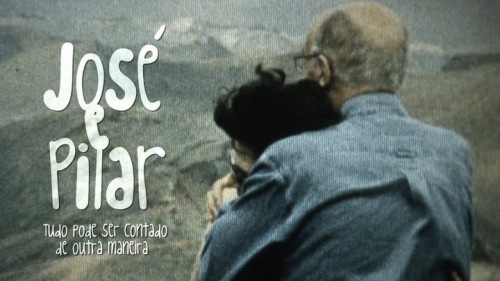 - Universality: José Saramago is a Nobel Prize winner who sold millions of books and had them translated into 42 languages. He is also a huge example of the rare successful thrivings of the Portuguese culture in the Anglo-Saxon market and society.

- Has power and influence to reach the Academy: it is co-produced by Pedro Almodóvar and Fernando Meirelles, both members of the Academy and recognized filmmakers who either won or were nominated for Oscars.

- Critical and viewers acclaim: got very good reviews wherever it has already been (even in Variety, although it is still to premiere in the US) and gathered the most tender and positive comments by the public worldwide.

- Will race for Academy's Best Documentary: it will go through the the qualifying run for the category, providing the US distributors with a chance of a synergy of promotion for both candidatures, beneficing of somewhat like a "mutual pressure".

- Worldwide premiering: has premiered in Portugal, Brasil, Spain and Italy and will premiere in Mexico, US and Canada.

- Made people care: even if just a little, even if still a vast minority, it made people actually discuss Portuguese cinema - which should be the right choice for the Portuguese representation. People don't care about Portuguese cinema but this time there were those who wanted to give their symbolical support by signing a petition about the film. And then it is all over the national news while last year I can only remember three lines in a newspaper about "To Die Like a Man.

- Outsiders: the Academy also goes for films that break their traditional patterns and expectations - "Dogtooth" (2010) is thematically and aesthetically though and risky; "Waltz with Bashir" (2009) is a fake documentary animation; "12" (2008) is a foreign remake of an American classic; "Paradise Now", attributed to the Occupied Palestinian Territories; "The Red Balloon" (1956), a short film which won Best Original Screenplay. The time would come when a documentary would make it to Best Foreign nominee.

Still manages to sound like fiction: as many reviewers wrote, it "ends with the illusion of the pure documentary", and shows you people that suddenly are fascinating characters who you follow in a very nice adaptation of a traditional narrative to a documentary. After the fic-doc, what about the doc-fic ?

And because, personally, is one of the greatest Portuguese pieces I've ever watched.