"The Ides of March" opens to mid-high rates; complaints about naivety 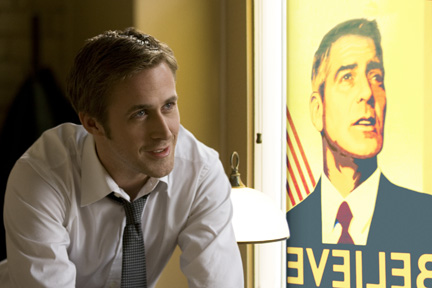 "Had writer/director George Clooney and his co-scripters Grant Heslov and Beau Willimon injected The Ides of March with the intimate political conviction that made Good Night, and Good Luck a critical standout and a frontrunner for liberal patrons, the exit polls would be more positive on this political thriller juggling idealism and corruption with fairly predictable results." (Debora Young, The Hollywood Reporter)

"George Clooney's campaign thriller starts out with crusading zeal, but feels a little commercial for an opening night slot at the Venice film festival" (Xan Brooks, The Guardian, ***)

"For a film that affects a jaded, it-was-ever-thus air about the reality of dirty politics (that title isn't exactly rich in ambiguity, either), the way it stares earnestly aghast at the characters' hypocrisies and double-crossings is itself naive at best, and downright disingenuous at worst." (Guy Lodge, In Contention, ***)