"Moonrise Kingdom" is a rare bird

You might fall in love and still not be able to define a route for the streams of landscapes, colors and songs that blur your reality checker.

But when you're twelve and experience that soft rush of innocent love projected over an uncommitted faraway future, you know exactly what is happening and which should be your next steps. You may not know how to behave at school the next day when you sit beside your sweetheart, but since last evening you've been tripping on your own world, taking all the chances, running out all the possibilities, descending the most fantasist paths (and so austere are the elements of real life like Suzy's little brothers). Of course you do want to marry him or her. Such a genuine unawareness.

Suddenly, one year goes by and you've grown up. Adolescence climbs onto your shoulders, pimples pop up, sex becomes a major issue, you may face your first existential doubts and you're already halfway out of the egg.

Moonrise Kingdom is a beautiful vintage portrait of those fugitive times right before childhood has vanished across our maturing body.

The color palette - beiges, browns, greens, yellows, some blues - the unbridled travelings in perfectionist framing, the theatricality of the arrangements (characters always facing us, like the Scout's table) are the utmost exacerbation of Wes Anderson's visual aesthetics. Sometimes it feels more like an animation than Fantastic Mr. Fox (2009). Sam and Suzy's journey is an adventuresque escapade in a nameless magic-realistic land surrounded by seawater and visited by seaguls. If the meet-cute is a bizarre dreamy conversation between a scout boy and a bunch of girls masked like flamboyant birds, the climax is a clinging of hands taking on from Rapunzel to The Lion King, as the stormy dark night threatens to kill all the lovable souls of the movie. When the two kids dive in the canal or when we see the binoculars' POV, it has got a fainting orange hue, just like an old summer photo. This is a fairytale, stories inside stories (all the bookishness, the vinyls, the theater, the flashback), a deliberately created unique place. A motion capture of the imaginarium of a child in love. That's why this is an isolated reminiscent but anachronistic place inhabited only by these people, whose dwellings are narrated like a BBC wild life documentary – the ultimate naturalness. It is obvious why it never cares to be a traditional coming-of-age: doesn't tackle sex (although there's that funny moment at the beach), drugs, school or even the familiar issues Anderson's adults end up dealing with (right here and in his previous films). Wes says this is what his twelve-year-old self imagined when in love. I did too. Our own egocentric bravery, the implacable antagonist that may or may not become our best friend in high school and the extraordinary solutions we can come up with among ordinariness (the tree house, the scissor, the thunder).

Although deadpan, these are characters with depth. Anything can happen in Moonrise island, and because Sam and Suzy are going to be in love forever (so they believe), they can marry each other. Hence the naivety I meant at first. That's what the beetle fishhook earrings stand for ("How are we going to take these?"). What grounds us to reality is the wisp of blood descending her neck, the melancholia of the adults and their fate as sad institutional enforcers - police officers, scout chiefs, lawyers, social security agents (strike of narrative genius by Anderson and Coppola). But in this imaginary world the children can escape all the way through (no authority, not even chief Harvey Keitel, will be able to refrain them). What's dark about it is that this is their last chance - like I said, one year from now they'll be giving their first steps into adulthood and starting to be sorry "for all that still hurts" (says Frances McDormand to Bill Murray) - we see the seeds of that suffering, as when Suzy takes a bath. Only Bruce Willis' character overcomes the mechanicness of his function and recreates the parental bond Wes Anderson is so fond of (well, Norton is surprisingly heroic at the end).

A first love as dumb as absolute and sincere: "What kind of bird are you?". 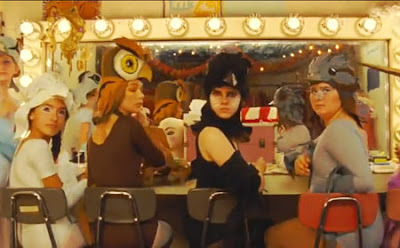