"Ted" is funny as fuck

A furry sand-colored teddy bear that lilts "I love you" when you pat his back is your delicious hugger for a night of thunderstorms. Overused cliché for children's playfulness, innocence and cuteness, until Seth MacFarlane, emperor of an animated world and father of a new limbo of humor and satire, twists it, wrests it, perverts its morales, puts a joint on the corner of his mouth and grows it a ghost dick. A stoner brocom-romcom that grabs hold of the writers' droop for outrageous jokes and scandalous situations as we've watched for the last ten years since Family Guy, American Dad and now Cleveland Show. The dialog is sharp and the predicable plot points are executed with surprising novelty, becoming the best comedy of the year so far (more laughs than last year's Bridesmaids).

Ted ran after the unusually self-conscious marketing campaign Ted is Real. While in the first ten minutes of the movie the characters learn the toy has been Pinoccio'ized (news broadcasting helping to create a solid sense of credibility) and now acts like a human, he was constantly advertised as authentic in our real life - the messages of support for the Euro'12 or his holding the Rated-R cards in the promotion stands. A first-rate motion-capture animation and great character writing accomplish such corporealness. Ted was alive for me last night. Whalberg was too but I am sad that Mila Kunis was under-explored thus refraining her comic potential once again. 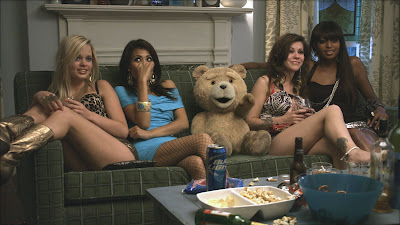 There's a figure, an iconic figure that I shall not reveal, tying the whole act together. Alongside a perpetuating night wish and an incorrigible recklessness, a childhood idol is a mark for nostalgia, friendship and coolness of the old times. That's what bonds fit Whalberg and Ted's world to later break it apart, making them go on a coming-of-middle-age journey to restore Mark and Mila's love relationship. Add it a thimbleful of disgusting antagonists to darken and heighten the stakes and you've got a third act.

One of the most interesting things to grasp from the film is the import of the visual and specially narrative style from Seth's animated series (much more than the voices and the meta gags). Mocking everything and everyone, differs from The Dictator in that it focuses itself on pop culture (it makes 9/11 as pop culture as Susan Boyle, while Sasha shuffles it as political satire). But the action scenes, soaked in violence and exhaustion of beats, and some particular shots (like the dizzying travelings when they're stoned at the party) attain Seth MacFarlane's uniqueness as a filmmaker.