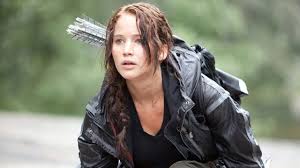 A long gone revolution culminating in an apocalyptic failure of humanism and morals. The disillusion has been turned into unforgettable films throughout the history, from European auteurs generation, such as Fellini's La Dolce Vita, to the American satire, such as Lumet and Chayefsky's Network. Could it ever be printed upon the popular papers of young adult adventuresque tales with at least decent relevance? The Hunger Games, adapted from Suzanne Collin's book by herself, Brian Ray and the director of the film, Gary Ross, did it. 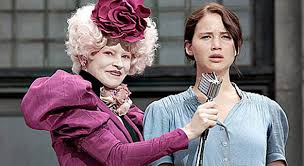 A funky flamboyant futuristic city that applauds the sacrifice of twenty-four 12 to 18-year-old boys and girls to brutally fight to death in a giant arena while two extravagant anchorman comment on the events with smiles that require more craftsmanship that hunting a unicorn. The twist from Orwell's big brother is the fact that we the people are the actual entity behind the cameras. The totalitarian action is inflicted upon twelve districts, who provide the contestants for the Games.

Before the rumble begins, participants and their managers have much to account for. They have to impress the ravenous cheerful population and possible sponsors that might provide them with survival utilities during the hunting. Those boys and girls riffled out of a pot and off of their families embrace a perverse version of honor, courage and sacrifice to parade as if carrying the Olympic Torch, to train as if fighting the Death Star and to kill as if amusing the Roman Empire. From then onwards, they're all gladiators in a coliseum controlled by technological features that approach it to a real-life videogame experience and broadcasted as a common reality TV show. The experience attains the dimension of a Super Bowl. 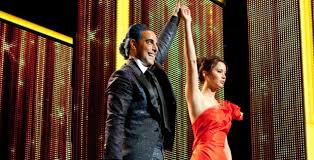 If you expect to watch a sophisticated film, this might cause you a rash. Some dialogue lacks subtlety due to the target audience, the third act has some deal of phoniness, some questions are left without satisfying answer (why would she trust him again?) and the secondary characters are flat (Stanley Tucci is brilliant though). If done by Kubrick, it could have taken a very interesting and important anthropological steering. But if you look at it as what it is and not as what your favorite filmmaker would've made of it, as I did, you can have a very enjoyable cinematic experience. These are Campbell's rites of passage, step by step, with the hero's sacrificial matrix in all the spots (she even volunteers). It has good moments, interesting alliance making and breaking, and Jenniffer Lawrence (as Katniss) is absolutely marvelous - this is a young-people blockbuster in which the protagonist spends maybe half of the second act barely speaking. As far as I'm concerned, its strongest asset is the romantic metaphor: Katniss-Gale's love story is absolutely cliché and fake. And that's it, that's what Katniss wants. She's been learning it from the flames during the pageant, from the great talk-show scene, from Haymitch's advices and foreshadowing after foreshadowing we watch her fool the world and her partner Gale, because although they're archetypally bound, she always knew that working that fake romance would bring audiences, claps, sponsors and, ultimately, a great surprise during the climax. You can go beyond and add some meta-narrative connotations: all the obstacles and magical potions the engineers arrange in order to propel the drama are the solution for the wearied or coincident nature of  some of the steps or sub-steps of the hero's journey when applied to the adventure genre. It ends in a great tone, with a very strong simple moment for the antagonists and with a captivating hook for the protagonists. I'll be waiting for the next one.