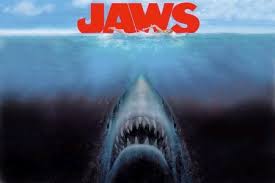 It was the summer of 75 when Spielberg's shark finally hit the waters of national theaters, after months of a uphill battling production. The horror, sci-fi, medium-budget film went to strategically scare the sun out of the population skin, planting a global seasonal panic of what one might encounter a few foot from the shore. It slashed the box-office off becoming the first blockbuster* ever, and launched the renowned director to the height of the industry. Jaws (1975) won Oscar for Best Editing, Best Original Score and Best Sound, losing Best Film to One Flew Over the Cucu's Nest (1975).

Take a look at the video, it's hilarious, epic.