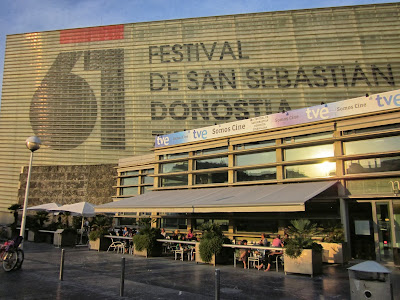 In August 2013, I was one of the twelve lucky European young cinephiles to be selected to attend a Film Journalism Workshop by Nisi Masa - European Network of Young Cinema, the first time they would do it in San Sebastián. Between Sep. 20th and Sep. 28th, we rushed between sessions through the lighthearted city, watching as many screenings as we could, reviewing them before daily editorial meetings in our bunker, and before some good fun in all sorts of festival parties.

Nisimazine, Nisi Masa's official online publication, focused on the section Kutxa - New Directors which, besides the prize money shared by the director and the Spanish distributor of the winner, may launch the selected filmmakers to the balcony of world cinema. It received the first or second feature of big names such as Pedro Almodóvar (Fuck Me...), Danny Boyle (Shallow Grave), Nicolas Winding Refn (Pusher), Thomas McCarthy (The Station Agent), Sarah Polley (Take This Waltz), Nadine Labaki (Caramel), Joon-ho Bong (Memories of Murder), among many others. But then, we also wrote about the Official Selection, Latin Horizons, Pearls and some from the Made in Spain section.

I wrote for Nisimazine in English about Funeral at Noon (Kutxa - New Directors), So Much Water (Latin Horizons), Workers (Latin Horizons) and Gloria (Pearls) and interviewed Gloria's co-writer/director Sebastián Lelio and, with my colleague Amy Thompson, Luton's director Michalis Konstantatos. You might want to check all the great work done by this talented and cohesive team and can access the four newsletters here or the final San Sebastián edition here.

I was then invited by Tiago Ramos to write in Portuguese for Split Screen, where you can find my thoughts about Gravity, Prisoners, The Wind Rises, Dallas Buyers Club, The Zero Theorem, Los Ilusos and Family Tour here; Enemy, The Young and Prodigious T.S. Spivet, Living is Easy with Eyes Closed, Cannibal and Bad Hair here; and Luton, Paradise, The Gambler, The Green Jacket, Mother of George and Wolf here.

My global thoughts about being there made a guest post in fellow recent-film-grad and film critic Robyn Davis' blog Scripts and Screens, and I quote myself:

«My words were commanded the herculean task of recalling the San Sebastián experience, or shall I say experiment, that locked me up in a parallel reality for ten days, from Sep. 19th to Sep. 28th. I watched twenty-five films and liked (to different degrees) half of them, which crushes my previous ratio record. I met people and made friends all over Europe (though Chile is not Europe). I took the same photo day after day, by the bridge towards the Kursaal, trying to capture the culturally rich, easy-going, sea-bathed vibe of this peculiar city in Northern Spain.

You’ll get close to what I felt if you can say it out loud, in one single breath:

Giant posters, luxury rooms, red carpets, wet people on top of surfboards, wind-motioned people on top of bicycles, hundreds of journalists with accreditation green cards hanging by the neck, bars full of colored pintxos where is nearly impossible to choose what to eat, charming sand-colored buildings, beach surrounded by small mountains dressed in pine forest, the sea and the river so beautiful PTA could’ve shot The Master there, parties for all and for nothing, business card trading always around the corner (which turned networking from dreadful activity to routine), Annette Bening watching The Face of Love in a regular screening (as if she’d go unnoticed), Hugh Jackman being incredibly humble and funny, Denis Villeneuve revealing himself as one of the greatest filmmakers of a generation…

Easy? What’s easy is to watch the films again. The people are what I’m already missing the most.» 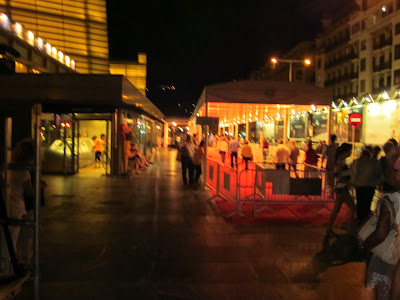