The Curious Curse of "Django Unchained" 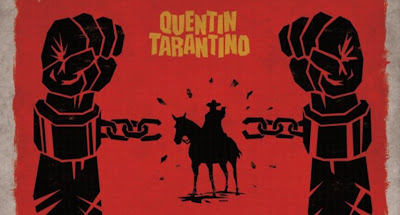 I couldn't help but notice a newly forged body of criticism towards Django Unchained, the antebellum southwestern spaghetti by Quentin Tarantino, another masterpiece if I may. I've heard it in many voices, I've read it in many heartburnt texts, and they seem to suggest that Quentin became suddenly cursed by his darling filmography. Whereas until now the myriad of references, the loudspeaking influences, the flamboyant homages and the twisted pastiche aesthetics, all contributed to the ecstasy of his unique approach to film, Django Unchained made a strange room for sad people complaining about the same things they've been praising all these years.

Now, it is too much referencing. Wearied pastiche. Stop trying to homage stuff. Quit mixing Morricone with RZA. Tarantino knows nothing about western spaghetti or Sergio Corbucci.

What I guess is wrong with these Ambassadors of Paradox is the fact that they can't keep up with Quentin Tarantino. He steals from every movie ever made. By doing that, he breaks the fourth wall and yet is capable to draw you particularly close to his universe. It's a different kind of nearness from that of the classics. It's taking the notion of participating in the story by following character dramatic hypothesis and put it into another dimension. It might not be Lubitsch's 2+2 but some slightly more complicated mathematical operation. Tarantino and the movie merge into an identity and that identity has been watching the very same stuff you have.  You watch the scenes from Reservoir Dogs, Pulp Fiction or Kill Bill and shout "Oh, I know that!", "Oh I got that!", "Oh, I've seen it before!".

The trouble is: it must make some people think they are close not to this identity, but to Quentin, the Director, in a species of symbiotic relationship responsible for moviemaking.

Only this time he exceeded himself. Not in quantity; in quality. He injected whole genre conventions once again, he twisted them, he brought contemporaneity and made historical revisionism, he was so subtle and intelligent, so intense and dynamic, these people couldn't ever bear it. For the first time ever, they couldn't keep up with the benchmarks. They realized Quentin is actually a genius - meaning far, far away from them in terms of making movies. And now they feel abandoned. Forsaken by a man they thought they had gripped in the early nineties but who fortunately races at an unexpected but delightful pace that will leave them waving on the side of the road.