If you're not from Lisbon and never casually hit the remote control to glimpse at a two-minute report on the curious figure of João Serra, you might haven't heard of him. He was known as Sr. do Adeus (Mr. Goodbye), for wandering Saldanha at night, carrying a shopping bag, and perpetually waving goodbye at transient cars. Night after night, year after year, wearing black-rimmed glasses, long white hair slicked back, and a warm smile on his face. Shortly, previously oblivious drivers grabbed the wheel with one hand while stretched the other to mimic the salute. Was he a hopeful man or an insane token?

Estórias (2013), an hour-long documentary by Portuguese young filmmaker João Gomes was produced a couple of years after Serra's death and opens with archive footage, combining the always well-groomed man on some of those nights with anonymous arms of dozens and dozens of people, fluttering in farewell, homaging the latest. He became a tiny local legend of human affection. 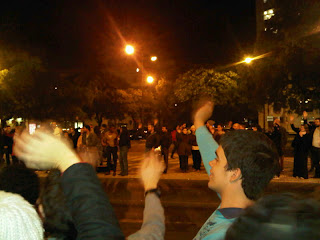 Now, if you don't know Gomes (the rest of his filmography only includes Natália, Diva Tragicómica, a documentary about a Portuguese part-mysterious-singer, part-folk-myth, that will remind you of Sunset Boulevard's Norma Desmond), and consider the 60-minute format and the production by TV channel RTP2 you may fear you're in for one cute little newsreel like those you may have missed when zapping on and off around news-broadcasts. I shall tell you how unforgivably unfair that would be. For when the prologue ends and the rest of the movie begins, it doesn't become an obvious descriptive biographical piece about one figure. It rips those expectations to shreds and embraces three new characters whose lives, intertwined by editing with the peaceful, kind, but enigmatic look of João Serra, tell a story about loneliness, the value and nature of relationships, and bittersweet expectations about life and whatever goes beyond that.

Frederico is an outsider on the sidewalk, where he rides a bike contraflow, slowly, trying to dodge the peasants. Seems lost. His job is a bore and he doesn't have companions. But he found out about Alfama-te (takes in the historical neighborhood of Alfama and "amo-te" means "i love you"), a concept that defies you to, among other things, set up a table in the pavement - towel, cutlery and actual food included - and invite a portion of strangers to have a fancy dinner. They meet, eat and drink. At the same time, they listen to each other and also speak. It's like having a chat. Only during these vanishing hours, the bells ring louder. They strike relationships. They seem best friends for one night, on a sequence of The Big Chill (1983). Frederico, divorced with two kids, tells the same story over and over again, night after night, to everyone he brings together around that talbe. He craves for watching the Apocalypse from a high place. Follow the sight of the mass destruction live, until the last second goes off. Sometimes, he wants to face the end of the world in the middle of an orgy; sometimes, he wants to be holding his kids. There's something disturbingly grateful, irresponsibly conscious and existentialist.

Helena lives alone, seems to work alone in an office with a dozen other equipped secretaries, eats alone her packed lunch. The only time of day she's close to a living thig is at the gym, where she seems to spend half of her day. She hates to sleep and thus runs, lifts weights, rides the bicycle, stretches, does aerobics. And still, she barely has a chat with someone, so forget about human warmth.

Joaninha is terrificly funny and sweet. The widest, happiest smile of the movie, that never wears off (literally). She's old, and became a TV star as an extra. No wonder, as she comes back for one day and still commands the crowd into erupting bursts of cheers. And this is why she's the one who hurts us the most. The voice-over tells us about her deceased husband, how she can't even stare at the pictures and how black she feels inside sometimes, despite the mask of joy she never peels off - she refuses to, because she believes she lived her life to the fullest and the memories are hers and thus has not the right to spread grief. She articulates one of the most painful truths I have ever heard, that plunged in me like an ice-cold sword: "I was very happy. And that's why I suffer." She is envied at work, but those are plastic relationships she merely manages.

"Estórias" means "stories". Frederico doesn't remember who he met last night, as if he restarted his life over and over again, trying to get rid of the compromise of living among others, but always reaching for human contact at the end of the day. As if he, by rejecting family and friends, could face the inherent loneliness of life on his own, reincarnating a personal hope of a new unknown path brave, at every dinner. Helena, the only character who never enacts one single act of optimism, seems sad for whatever she's lost (and we don't surely know what that is) and breathes condemnation from every pore. Joaninha carries on. She is the happiest and saddest person in the world, and the news is, that's the best we can achieve one day. The joke is on us.

Because this is a story told through stories, this is the story of João Serra. Those doors constantly closing throughout the film are the main link. An estranged person believing he could try to reach the others by enacting the simplest, most symbolic social gesture there is. He knew his time was drawing near, but he too was bittersweetly hopeful. Of what? Maybe of getting a response, maybe of just being able to do it over and over again.

"Estórias" is a mirror room. They mirror each other and somehow mirror ourselves.  They wave, we wave back.