I ought to be looking for the black box of this screening. Nothing went wrong and I'm still one piece but I'd like to find the frame of my face realizing Gatins and Zemeckis had stored in a much different approach to the premise than I had in mind: an action-packaged ride of a wrong man running from a massive Government conspiracy. Instead, I saw a dedicated character-study of one man clinging to a wrecked personal life.

A one-minute opening scene with very little dialog and a lot of good visual first strokes of the main character. Katrina (Nadine Velazquez), a beautiful naked stewardess finds her panties while Whip Whitaker (thumbs up to Denzel Washington) collects the last two drops of vodka out of a bouquet of empty bottles, lights a cigarette for breakfast, and answers the cellphone to his divorced wife asking for money. The rough night has come to an end because he now has a plane to fly. Or hasn't it? He snuffs a line of coke to pump him up and get him ready for the clouds. Joe Cocker's Feelin Alright rocks in - this was going to be good storytelling.

The plane departs, turbulence hits and things go murky: a sleepy, alcoholized, drugged pilot must regain control of the engine, diving nose-down, and stop it from crashing. It's a frenetic rhythm caught through editing; an intensity of stakes given by Washington's voice, maneuvering and rapid-thinking; a subtlety of emotions plastered on the pilot's face when a stewardess dies after saving a child and when he asks Margaret (Tamara Tunie) to declare her love for her son to the black box. The coin of unexpectedness flips when Whitaker flips the plane upside down, arresting the descent and starting to glide, before bringing it back to normal position and landing in a field. He looses consciousness and you can finally breathe. Extraordinary sequence. 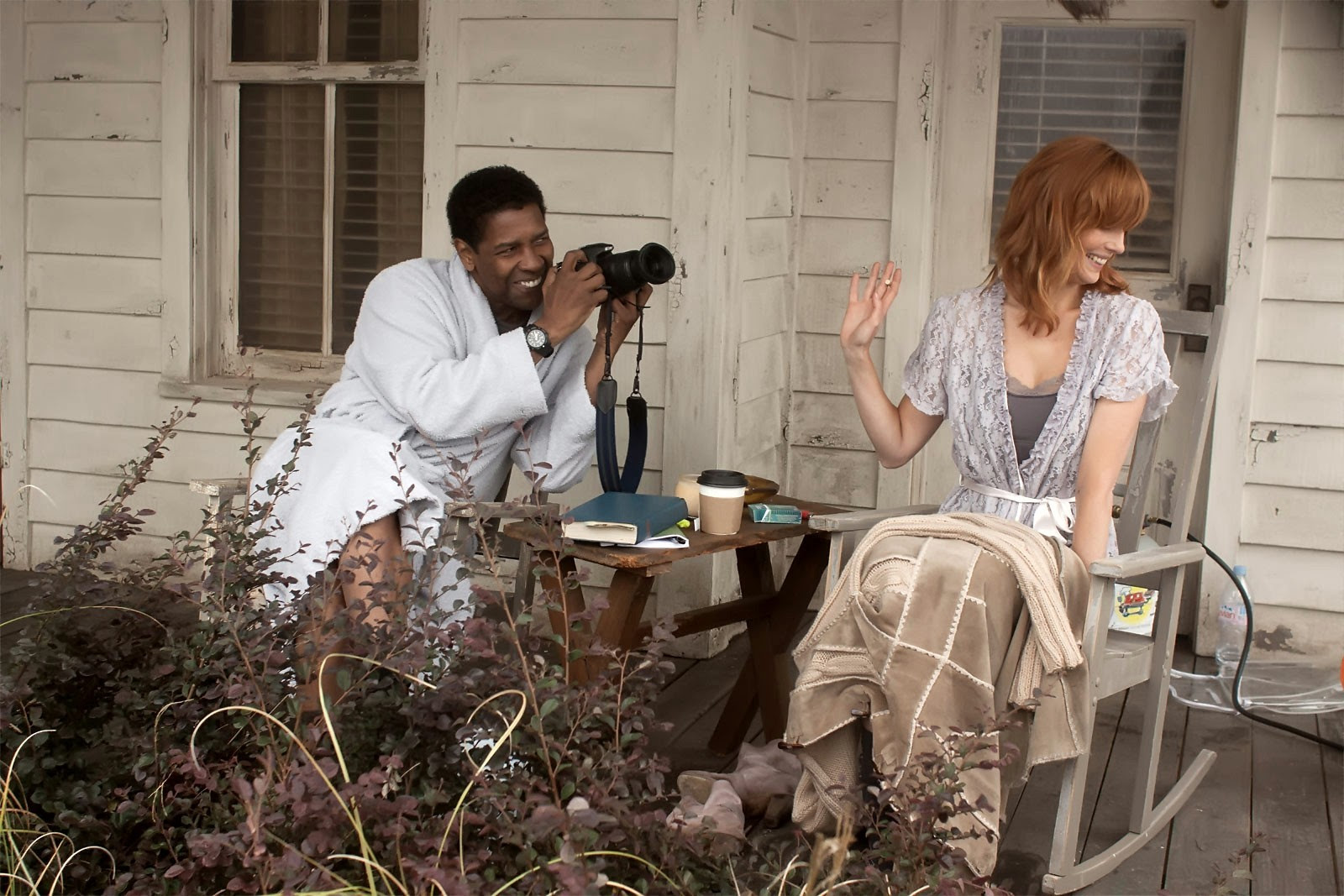 Ensued is the most simple of stories. Whip wakes up in a hospital bed, six people have died (including Katrina), more than half were injured. Who is to blame? No Cold-War syndrome, no post-9/11 trauma, no cabal of any kind. But this newly congratulated hero, the hand of the latest miracle of God, had a toxicological exam made. Who is to blame? Is he the wrong man, the right man, the righteous man? Is he a savior or a killer? The airplane was probably defective, as grants Charlie (Bruce Greenwood), his friend and representative of the pilots union; but he was drunk and high too. Yet, "Nobody could have landed that plane like I did.", Whip retorts. Hugh Lang (Don Cheaddle), a lawyer specialized in going against NTSB (National Transportation Safety Board) investigations, is the only one capable of getting Whitaker through the agency's hearing  - he can annul the toxicological analysis and focus the defense on mechanical deficiency.

Whip takes refuge on his father's farm to stay away from the media, sweeps off any trace of booze and weed and tries to reconnect. He can't reach his ex-wife nor his son, but he has met Nicole (great surprise by Kelly Relly) at the hospital. She deserves her own POV not only for a wise foreshadowing (why is cocaine like a panic-button sometimes) but also to prove we are in for well-rounded characters beyond a sole, typical, action movie plot function. She represents the hopeful fringe to cure, compassion and affection, while his friend Harling Mays (John Goodman in his typical 7-minute-overall show-stealing) is a bohemian drug-dealer capable of cheering up Rose DeWitt Bukater when she's back on the lifeboat.

The drama progresses on Zemeckis' calm, observant, introspective camera. Quiet places, soft light. What could have usually been a third-act resurrection (e.g., flushing down marijuana; trying an AA meeting) are tests, failed tests, on the middle of the story. Turbulence that instead sends Whitaker on his own personal emotive steep downfall. The legal drama angle keeps a large pace but every new scene comes underlined by the protagonist's moral struggle - he is awfully tired of lies. Two surprising turns at the end - what he needs to go to the hearing of the NTSB (headed by Melissa Leo) and what happens there (delicious metaphors and character arc). Then you ask, what kind of man his he? 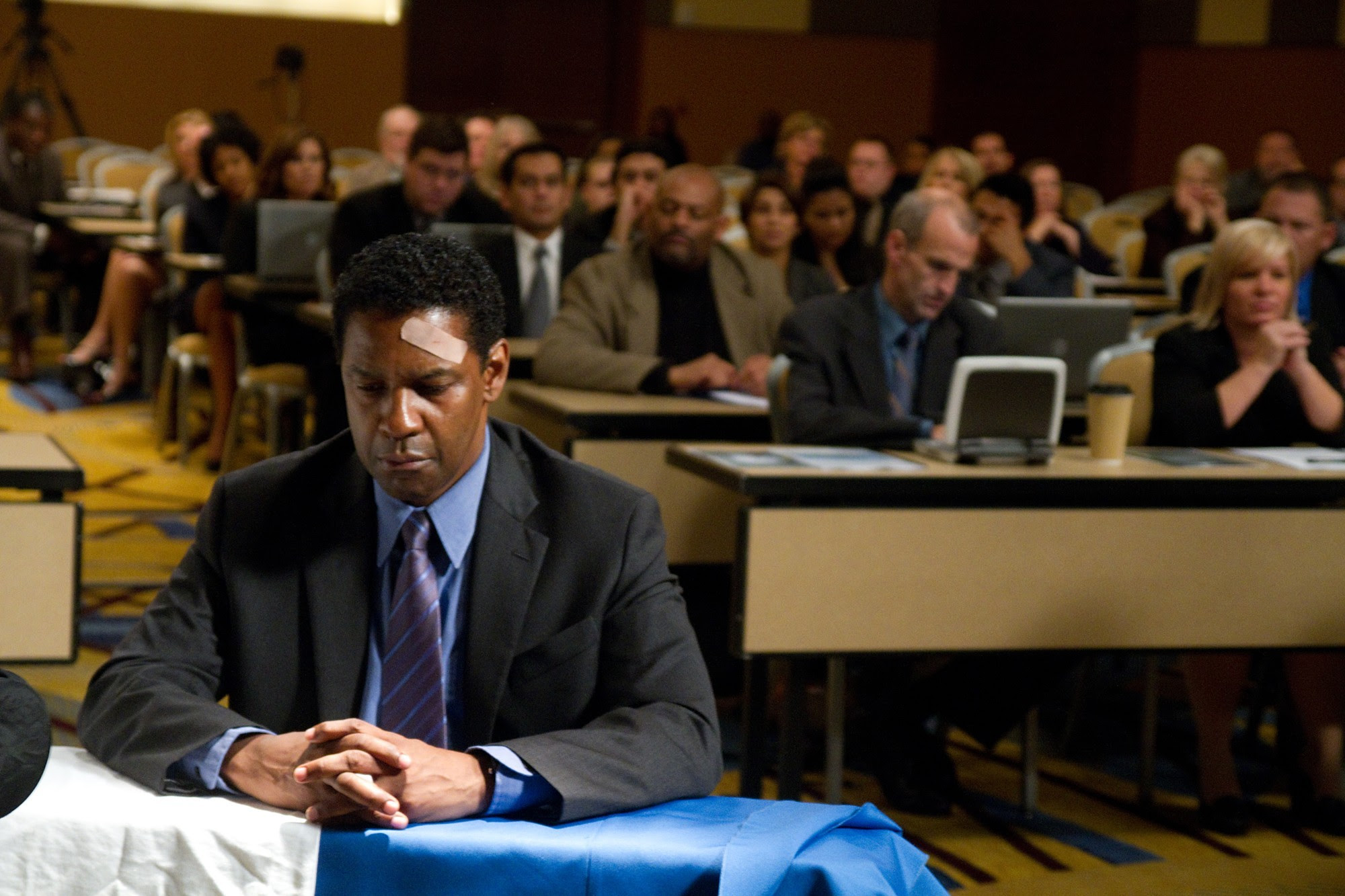