"Argo" is truly the escapist feature 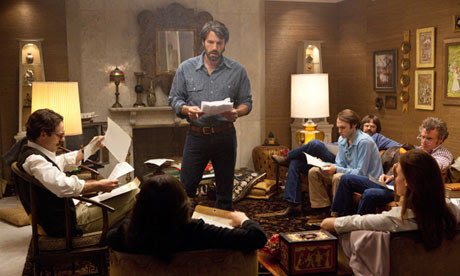 Tinker, Taylor, Soldier, Spy (2011) was a cold, analytical, slow-paced, spy movie engendered by minute attention to detail and a puzzling structure inflicting a paranoid feeling of double-intentions and distrust of your own and Smiley's fragile conclusions. It was commanded by Swedish director Tomas Alfredson and resulted in a little masterpiece. I could get used to one of those each year. But I didn't mind a bit sitting to watch a whole different approach to a melancholic main character, a troubled international political context and an espionage agency as the otherwise vibrating, exquisitely tense and witty flick that is Argo (2012). The year's ultimate escapist film, though it is much more than watching a bunch of guys trying to escape Iranian crazy people.

The premise is a delicious starting point. The real-life story of how the CIA and the Canadian Government hooked up with Hollywood to produce a fake sci-fi movie in order to remove, as part of the fake crew, six people from the Canadian embassy in Tehran, during the hostage crisis the U.S. suffered in 1979. A somewhat metanarrative political thriller that buckets as much suspense as comedy potential.

And that's how it rolls. Chris Terrio's script is a straightforward incredible machine of tension, suspense and last-minute touchdowns where slight distortions of historical facts only happen on behalf of the drama (as the "adaptation" of President Carter's delay in approving the plane tickets). The way it delivers the tons of thoroughly-research-based but elegantly-baked exposition makes the bed for the oiled interlocking of three very distinct worlds: CIA headquarters, Hollywood studios and Tehran's mutinies. The secret was to ally the bureaucracy and urged political swing of the first, the hilarious comic relieves of the second (among the golden cast, a special bow to Alan Arkin) and the claustrophobic, rioting suspense of the third, with Ben Affleck swifting between them both in front and behind the camera.

Affleck is fine as Tony Mendez, but he exceeds himself once again after The Town (2010) on the director's chair, confirming for the third time and hopefully once and for all that this pretty boy is up to the challenge of being considered one of the most valuable filmmakers of his generation. This is not a guy who read the script and decided to shoot it. This is a man who understood the story and interpreted history, or else he wouldn't have been able to create this tale of asphyxiating timing. Close-ups locking the characters into frightening impatience and uncertainty; the capacity to make you feel the tumults of the revolutionary crowds; strong editing; a cut-in-half 35mm filmstock, increased by 200% to produce an aged graininess - some of the distinctive options the young director took that put you on the edge of your seat. 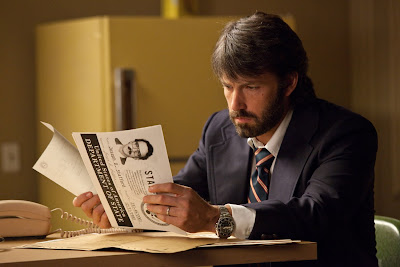 Some will complain about the overpopulation of characters and the lack of development of most, if not all, of them. "Argo" is a heavy-plot-driven movie, relying more on the smartness of the operations and the dimension of the stakes than on the character's inner lives. Although it cares to show you how broken Mendez's life is and that draws you close to him. It is as subtle and economic in conveying the sentimental states of the couple among the hostages and Lester's among the movie business. They had more stuff on John Chambers that didn't make the final cut, and maybe even on Jack O'Donnell, but this wasn't the time nor the place and I plainly accept it as it is.

I believe this film will live as another testimony to the power of stories and how they basically structure our perception of reality. It's all in there, as when they offer the Iranian militia's some storyboards as souvenirs. The dangerous game of real life and the amusing, often escapist, flare of storytelling is the inevitable way to look at things, at living things mostly, even if you don't take part in the fictions of diplomacy and international politics and just humbly want to tell the weather to your friends.